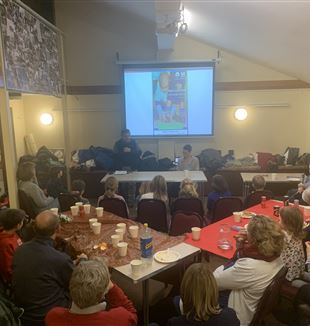 On Monday, 21 November, the Cambridge community hosted Antonino Masuri from AVSI in Kenya for an event about their current Tents campaign: “Peace is Possible, Let it Begin With Us.”

About forty of us spent the evening together, including many children. We began the evening with the Angelus, asking Our Lady that we might be servants of all the human situations and anxieties we encounter – as the Pope exhorted us during the recent audience. Then we shared a meal as the children raced about the room before settling to listen to Antonino’s words.

He began by recounting the story of his vocation. The invitation to mission in Kenya came in 2007. When he said “yes” to the call, Carron encouraged him to remember that he was going to share the overflowing of the relationship with Jesus. Only on this foundation could he build anything. And in the fifteen years since, Antonino says he has changed through discovering Christ present. “There is no better human development strategy,” he says, “than Jesus Christ.”

We were interested in the difference that the presence of AVSI brings in situations of deep human difficulty, including refugee camps, warring tribes, and dramatic poverty. Antonino responded by showing us countless photos of beautiful faces, telling us the stories of those whose lives have been radically changed through the friendship of AVSI. He emphasized that AVSI always starts from the positivity of what is already present, then extends a hand of friendship to embrace every need – no matter what human boundaries this gesture of friendship might cross. It was clear that the journey that AVSI walks with families and children generates a new presence from within local communities, a new presence that becomes itself a source of change.

Finally, we wanted to know how each of us in Cambridge can participate in the work that AVSI is doing in Kenya. Especially in the face of the dramatic situation in Ukraine, and the Pope’s call to be prophets of peace, we feel this need urgently. Antonino told us that we can only share what our own hearts have received. Peace begins, he said, “from a mother loving her children.” This peace is the choice to build instead of destroying, to forgive instead of hating, to walk on a path together instead of despairing. Peace grows through education, through learning to see others and the environment as given by the Mystery. And we can participate in this by living our own friendship here in Cambridge – and by supporting AVSI financially and through prayer.

I was immensely grateful for his testimony, which filled me with wonder at the extraordinary companionship given to me in the Church. It renewed my own “yes” to the Father in the circumstances in which He has placed me, and made me desire to imitate Antonino’s confidence in begging for everything from God. Especially, as we enter the season of Advent, asking the Prince of Peace for the gift of peace in Ukraine.