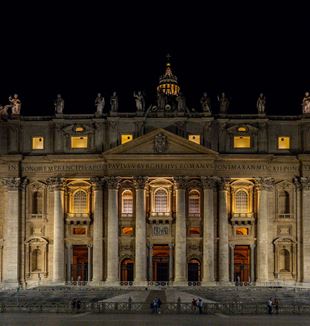 The dominant sentiment that remains after last weekend in Rome is one of gratitude – a gratitude to the Pope for having granted this audience and for his words to us, a gratitude to Fr. Giussani for his yes that allowed the Holy Spirit to work through him, and a gratitude to the Lord for having let me meet this charism. The journey to Rome was full of excitement and curiosity, looking forward to being with other members of the movement from around the world and curious to hear what the Pope would say to us. We arrived in St Peter’s Square shortly after it opened and immediately made our way to the area assigned to the communities from outside Italy. What a grace to meet there several friends from around the world who had made the same journey, as well as others who had travelled from the UK, and to catch up with them before the main proceedings began.

The start of morning prayer at 10.00 really changed the climate and put everyone in front of the true reason we were there, as a pilgrimage to Peter, to remember and give thanks for a man born exactly 100 years ago who had led each one of us to a deeper encounter with Christ. This reason became even clearer as the recordings of Fr Giussani’s voice resounded through the square in the subsequent readings. As I heard him explaining again the “yes” of St Peter, something I have heard many times before, I perceived again in that moment the presence of Christ asking me again in all my misery “Do you love me?”.

The arrival of the Pope was a moment of great joy, as people stretched to see him, standing on chairs, as he came round the square. There was an evident unity as we welcomed him, a unity not generated by us but by the fact that we were looking at him, that we were one with Peter. As he told us later, unity does not mean uniformity, and that was very clear in those moments, as people from many different nations and backgrounds were one in front of the Pope. My first impression when he started speaking was that of really being embraced by a father, one who was telling me that he understands the difficulties I am living but I do not need to worry, and that the Church as Mother embraces my experience and desires to help me to live it more fully.

There were many striking things in what the Pope told us, and almost every phrase needs time to be meditated upon, but there were several key things that struck me as initial points of work for my life. The first was the Pope’s insistence that a time of crisis is a time of recapitulation and growth. This has begun to be my experience in the last few years, with the difficulties in the Memores Domini and the movement forcing me to go back to the origin of my encounter more than 30 years ago, to go back to “my first Galilee” to use the words of the Pope. To rediscover the same encounter in my current circumstances really makes the road beautiful.

Then I was struck by the Pope saying that he hopes for much more from the movement and that the potential of the charism is still largely to be discovered. While there was clearly a paternal correction of the ways that we have maybe failed in the past, I perceived the Pope’s words as a real promise for our lives. If I am already living such a beautiful experience from the encounter, who knows what else I can expect as I discover the charism more and more? And then the realization as to how many people “have not yet had that encounter with the Lord that changed your life and made it beautiful” becomes an urgent desire in front of each person I meet, that somehow they can perceive His presence through their interaction with me.

The final key message that remained with me was the Pope’s recall to the personal responsibility of each person faced with his or her own destiny, and the fact that we are only mediators for others in the encounter with Christ. What a trust in front of the heart of each person! It is the same freedom that Fr. Giussani continually showed in front of each one that he met, a freedom I need to learn.

After the audience the pilgrimage of the UK community continued throughout the rest of the day. Following some free time for lunch, we had a Mass together followed by a tour of Rome and dinner. Then we joined other friends in a parish centre in Rome for an evening of songs, with several hundred people from all over the world, including from Europe, North America and South America. It was a very beautiful and enjoyable evening, with songs together led by the different nations in a really joyful atmosphere. As we concluded the evening by singing together Romaria as a prayer to Our Lady, I looked around at the different faces, of all ages and from so many countries, and I was struck by the thought that each one was there because in some way he or she had been touched by the charism given to Fr. Giussani. My heart was filled with a gratitude to be part of this story.