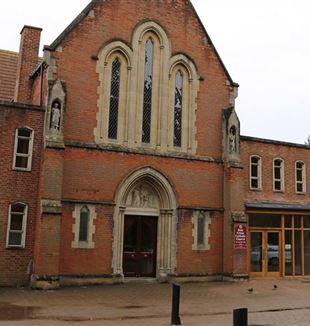 I met Chiara for the first time just over three years ago. Bishop Philip Egan had just entrusted us with the care of a parish in the English countryside where we still live – three priests from the Fraternity of St. Charles (Raffaele, Marco and I) and a seminarian (Andrew). During the first few months, we just said hello to each other after Mass, with that typical attitude of someone who is in a hurry to get on with something else, but at the same time does not want to be rude. Then Covid happened. Our church was closed for a few months, and so Chiara and I lost touch. A few months ago I saw her again at Mass. She was sitting in the corner with her grandparents. Her parents and siblings had not come to Mass for many years. I asked myself: What is she doing here? What is she looking for? Chiara is twenty years old and she is the only person of her age who attends our church. I approached her before going into to the sacristy and greeted her. We exchanged a few words through our masks. I do not remember what we said, but I do remember one thing: her eyes. They were beautiful, round and open, almost like a question mark that I felt was questioning me. But was late and Mass had to begin.

After the celebration I went to look for her; I did not want to pretend that I did not see that glimmer of a question in her. I invited her to the GS meetings that we hold in our parish on Friday evenings with about ten high school students. Risking an invitation can never be wrong. After all, is that not how God is with us, unconcerned about all our "no's"? The following Friday – to my great surprise – there she was. Our meetings always begin with dinner and end with a conversation around a meaningful text with the help of a few questions. Here in England young people talk during the meetings if it were a "debate". That is how they are educated in school. But when it comes to talking about themselves – like everyone, including me – it is not easy.

During dinner Chiara stood back and did not eat. After a while I approached her and asked her what was wrong. She looked at me and said in a small voice, without much conviction, "Actually, I have already eaten." "What is your favorite food?”, I asked her. "I love ice cream." "Wait here." I ran into our house, opened the fridge, and luckily we still had a bowl of ice cream left over from the night before. I went back to Chiara and put it in front of her. In less than a minute it was gone!

After a short while we began our meeting. Chiara did not speak, she seemed uncomfortable. In fact, ten minutes later she got up from the table, waved her hand and left the room. "You guys go ahead." I got up and followed her. Luckily I was still in time to catch up with her. I did not ask her anything, I just said her name. She turned and said, "How do you forgive?" Lightning in a bottle. I was not expecting that. I began to tell her how important confession is to me, that the only way to learn to forgive is to first allow yourself to be forgiven.... She said to me, "I do not think I have ever gone to confession." I continued to tell her about myself, speaking of the joy I feel every time I go to confession.

Read also – Lacking nothing in Oklahoma

A few months went by. Chiara began coming to our meetings regularly. At dinner she became increasingly more relaxed, even though she only talks to me and another girl who has become her best friend. During the meetings she is always awkward and does not talk, but now she stays until the end. Three months ago she said to me, "Can I come over at other times besides Friday night?" I told her that all she has to do is let us know beforehand... So sometimes on Thursdays and sometimes on Wednesdays Chiara rings our doorbell and we have tea together with the other priests of the house. She talks about her day, we joke around… Two weeks ago she sent me a message: "Do you have time next Wednesday? But just you and me." We made an appointment. The doorbell rang, I opened the door, and she said, "I am here for confession."

Today we often hear that young people are no longer waiting for Christ. Chiara's story teaches me that this is not the case. It is not that people today are not waiting for Christ, but they express this expectation through different languages from those we are used to, words and gestures that may seem banal, but which in reality are only the tip of an iceberg of questions that smoulder in their hearts. They are the same questions that I have. And it is in the sharing of this apparent banality that a road opens up before us, on which to wait together for the One who has come and is coming to forgive us.