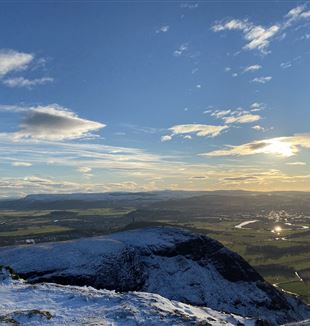 A couple of examples of recent experiences have been, once again, possibilities to rediscover that God really is in everything, and everything helps me to deepen that relationship with Him, I only need to be available and recognize it.

A few weeks ago, during School of Community, I found that I did not have anything to share that evening. Nothing extraordinary had happened those days (as if I were waiting for something great and exceptional to happen, to then have something to share), and, therefore, I was not able to “apply” the text we were reading to my experience. I was not scandalized though, I was just quiet and I thought that I was not going to say anything at all that evening. While I was listening to others speak, I realized that I was not loyal with myself; I was in front of something that was convincing me again, and during School of Community I realized that it was not true that nothing had happened. It was so clear that the companionship with the movement is so true and deep that even facts so simple to my eyes (for example, a couple of conversations with two friends that day) in that precise moment gained a new value. A new gaze, again, was taking me back, a new openness in realizing that even though life seems to go on and on, there is a point – School of Community – where I can meet Him again, where all my efforts and mistakes and limits are embraced, and they become part of the journey, of the path and of this friendship. It became clearer that everything, every detail, helps me to make a step towards Him, to go deep in that relationship with Him. And I suddenly felt the need to tell this to everyone that night.

Another example is related to the organization of the mass for Fr. Giussani. I was not actually thinking of organizing it at all, rather I was waiting for someone else to do that for me. When Achille proposed that I ask the priest here in Stirling to celebrate the mass, I felt challenged and I had to ask myself the reason behind that. Is it just a duty? Something I have to set up for the community? In fact, it is not a duty at all, I am not interested in purely doing things for others without asking myself the reason why I do things. Again, I had to be loyal: living the relationship with Him is not a duty but something that I want to live. While I was asking Fr. Robert to celebrate the mass, I had to make memory of the reason why I was doing that. I told him that I am very grateful to Fr. Giussani because he is the charism through which I am part of the Church, and it is thanks to him that my experience of belonging to the Church and faith is made possible. That became a starting point and a possibility of dialogue with Fr. Robert too. So it was, once again, the event of His presence that changed the way I was looking at things and at myself as well; not my interpretation of reality, but that tangible and concrete Presence that calls me to participate. I had to make space for Him to happen again.