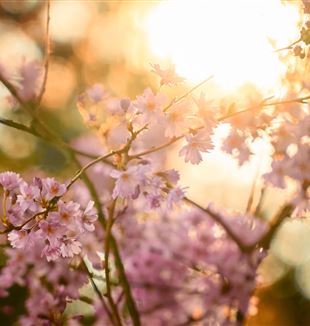 What is the source of our hope? Love. When I look at myself in action, that cannot but be my answer - though it might appear a superficial and emotionally-driven one, even welcomed amongst us with scorn for its obvious nature [I place myself amongst these people].

However, for me, love is the evidence, and the source, of a continuous desire, which goes far beyond pain. Love is the only truth that constantly emerges from a battle – that same battle that Carrón speaks about, "between being and nothingness, between gusto for daily life and the void that seizes us from within," and that changes my daily life from a position of nothingness to a desire for life.

After my husband left five years ago, I have spent so much of my time rebelling against any idea of love, finding it most of the time a sort of ideological beauty that was attractive and at the same time granted to others, but not to me. It was not always evident, but it was nestling in my heart. I reached low points that made me say, “Yes, of course, thank you for my children, thank you for my friends, thank you for my house and job, and even the beautiful sunsets and flowers, but actually I am not happy, I do not see how I am loved. I would like things to be different.” I was building a barricade and I was not letting it go.

However, surprisingly, these same cynical thoughts have lived within me alongside the undeniable desire for something bigger. There were instances in my life that showed me that it was possible to encounter a love that might embrace the whole of who I am, even my barricade. I could not give that up. But instead of allowing the breath of space for even a whisper to break the dam of my cynical heart, I decided to take the challenge of my freedom into my own hands, and make that love happen. I decided I deserved a better life, or maybe just a different one, and sought it. In front of the constant battle of understanding what being moral and open in front of reality meant, I said yes, for instance, to the chance of meeting a new man.

There were very early signs that this relationship was not what I was seeking. I, as a whole, was evidently not there. I was trying to get to the fullest of life by bargaining for a much lower and lesser ideal deal than I wanted; and the more I stayed in it, with my constantly wounded heart bleeding for hundreds of missteps, the more I fell into the pit of thinking that I was destined to always experience partiality and lesser relationships, as a sort of protestant punishment for how I turned out to be.

I kept it all within my heart until I could not anymore, because at the same time something so incredibly beautiful was happening. There was a glistening beauty that I wanted to look at.

Three facts. The gratuitous help of my friends – a constant that I cannot take for granted; the joy of the celebration of my daughter Lucia’s First Holy Communion, along with two of her friends - from the Mass to how her older sisters participated by decorating our house and writing a card that said ‘a new chapter begins’ – and recognising a breaking point with the past before and following Holy Communion; and how some friends decided to gift us their car – how our need sparked in them this decision as a way to answer to their vocation.

It was through these gestures, and others, that the uneasiness of the battle broke out with the cry: “Who are You who love me here and now?” I had to lay it all out in front of a friend who could listen to me, and whose face was the sign of a continuous tenderness for me. Being close to her, I let myself kneel again and pray, and welcome the note of wonder that was becoming so much more attractive than anything I had lived before. There, in the midst of the chaos, and not after all was sorted, I had to let go of all those structures I had built over my heart, and the first consequence is that I decided to stop seeing that man not because it did not fit some sort of behavioural rules, but because my heart flipped, as is mentioned by that person in the letter at the Beginning of the Year Day, from nothingness to a desire for life; it flipped in a way that made me cry out “I want this”, again, and again, and again. In that gaze of my friend, I recognised an embrace that so many times before has re-awakened my soul. It was love. It is love.

Now my heart has not stopped desiring a fullness even in a human form, I cannot change who I am, but in front of the alternative of partiality and nothingness, there is a love able to touch my heart so that I can fill it with bigger questions, rather than partial answers, from within the troubles, not after.

After all these years, I am still stunned by the fact that the method of the encounter with this mysterious love never changes, and yet it is capable of surprising me every single time.